Do you speak data?

Are you interested in telling data stories with data visualizations? But your data language can use some improvements? Maybe you are a beginner in the field or maybe you just want to brush up on your knowledge. Whatever the reason, you have come to the right place. In this article, we will explain the meaning of the most common terms in data and statistics that you might encounter when you are interested in creating data visualizations.

Every data visualization begins with a dataset

Let’s start from the beginning. If you wish to create any data visualization, you need a dataset. A dataset is a collection of data that is most often shown in a table consisting of rows (horizontal) and columns (vertical). In every box or data cell, information can be stored. Generally, the columns represent variables and each row represents a record.

To easily manage your data, you can make use of workbooks containing worksheets or spreadsheets to store the data. 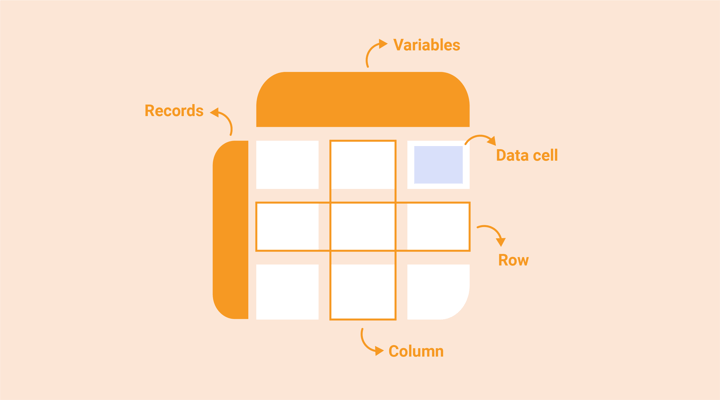 There are two types of numerical variables:

Now that you know how to categorize the variables, it is also important to match the specific data format. This will help in managing your data and being able to do calculations and perform operations on the variables1.

There are different types of data formats and we will discuss the most important ones. Continuous numerical variables are often represented as floats. This type of data format is composed of a numerical value with decimals. Discrete numeric variables are often represented as integers, numbers that you can count. Nominal categorical variables will be shown as strings, values that are treated as texts. And last, ordinal categorical variables will be represented as integers or strings. Categorical data can also be stored as a factor, which can be both integer or string. A factor includes several levels and the categories of the variable, and can be both ordered and unordered.

The type of variable we didn’t discuss yet is the binary variable. This is a type of categorical variable that can only take up one or two values. Often these are represented as boolean values: True or False, or as integers: 0 or 1.

Lastly, a common data format is the date time format. This type of format stores dates and times and this can be done in different ways, based on how the data looks like. 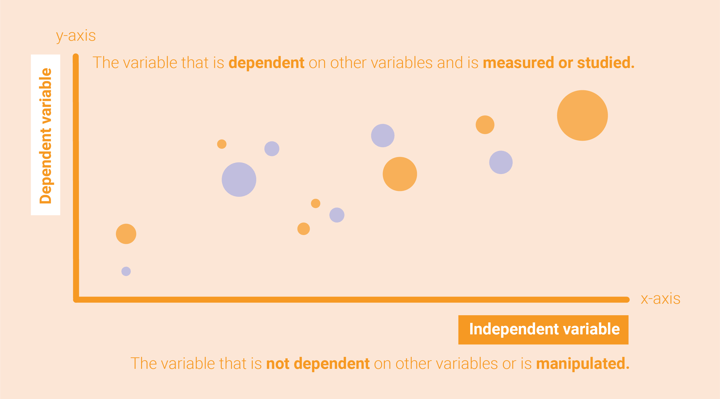 Sometimes there is a third variable that will influence the independent and dependent variable; the confounding variable. Considering the effects of such a variable is important when designing an experiment.

To give you more insights into the dependent and independent variables, I will show you an example of an experiment. For this experiment, a representative group from the population, also called a sample, is selected to participate in a running challenge. The group will be split into subgroups, also called conditions, and each group will receive a different type of energy drink. In this case, the type of energy drink will be the independent variable, or the variable that we manipulated. After consuming the energy drink, the participants will perform a running circuit and we will measure the total amount of time they spend completing the running circuit, their heartbeat during the challenge, and their heartbeat five minutes after they finish. You can guess, these variables will be the dependent variables.

After we collected the data of our running experiment, each possible outcome for the variables we measured can be described in a distribution. There are a lot of types of distributions, but the most common one that you are probably familiar with is the normal distribution.

The normal distribution is a symmetric distribution around the mean; values close to the mean are more frequent and values far away from the mean are less frequent. The mean in the data is the same as the average of the data and can be calculated by adding all values and dividing them by the number of values in the data set. The standard deviation (SD) shows how dispersed the data is compared to the mean and therefore will determine the width of the distribution. In more mathematical terms; the standard deviation is the square root of the variance. And what is the variance, you might wonder. The variance is the mean squared difference between each number in the data set and the mean2.

The mean in a data set is a measurement of central tendency3, a summary measure to describe a whole data set with only one value. Other types of central tendency are the mode and median. The mode is the value that occurs the most in the dataset and the median is the middle number of the data set. Some values will have a lot of impact on some of these measurements of central tendency. Values that differ abnormally from the others are called outliers, and these outliers will affect the mean but will have less impact on the mode or median of the data set4. In a normal distribution, the mean, median, and mode all have the same value, and 68.2% of the observations will fall within around one standard deviation of the mean5. 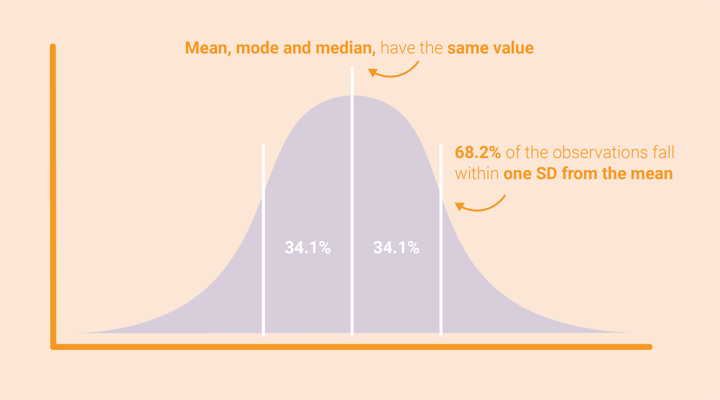 Besides describing the data with a measurement of central tendency, there are also some other ways to describe or do calculations on the data. A variant on the average is the moving average. This type of average is calculated by adding all data points in a specific time period and dividing it by the number of time periods. In this way, random fluctuations in the data are smoothed out.

Where the moving average shows the average value over a specific time period, cumulative values show the total so far. To find it, you can just add up all the data points there are so far.

Another way of doing calculations with data that you are probably familiar with is the ratio of data. The ratio is the same as the proportion and can be something like: the ratio between women and men in the tech industry is 1:4. You can also describe this differently by comparing the ratio with 100, which is called a percentage. In this case, the percentage will be 25% women and 75% men. A variant on percentage is percentage point. This value is the difference between two percentages. So if the data moves up from 50% to 55%, it moves up 5 percentage points but also a 10-percent increase. It is very important to know the difference between these two since you probably encounter these when creating data visualizations for companies.

Just like percentages, there is also another type of value that can never be negative; the absolute value. This type of value shows the distance of the value from zero.

As discussed before, sometimes your variable doesn’t follow a normal distribution, which can be a problem if you are interested in performing statistical tests on them. You can perform a data transformation on those variables and normalize them to make sure they equally contribute to the analysis6. Therefore, always check before you perform a statistical test, what the assumptions are of this type of test and if you need to normalize the data or if there are alternatives.

When visualizing data, you sometimes want to show if some categories differ significantly from each other. Most often these differences in a chart are indicated with one or multiple stars (*). But what does a significant difference actually mean?

Analysts will perform a statistical test and they will find out that a relationship exists between variables, that is not caused by chance7. The test they perform will show a p-value which describes the probability that the result found is the result of chance, or in other words that the null hypothesis is true7. Common p-value thresholds used by researchers in the analysis are 0.05 or 0.001. So next time you have to add a p-value to your data visualization, you will know what it means.

In this article, you learned a lot of terms that are used in the data and statistics field that might come in handy when you are interested in creating data visualization. Everything explained before in this article is all part of data analysis. However, there are also a lot more steps in the data process that are relevant to know for a data visualization designer. I will briefly discuss them so you will have a better understanding of the bigger picture of working with data.

The first step is data collection and this means that data is pulled from data sources. It is important to always check the quality and trustworthiness of the data source. Data collection can also be done by making use of an Application Programming Interface (API). As Amazon explained: “APIs are mechanisms that enable two software components to communicate with each other using a set of definitions and protocols.”

After that, the data preparation phase can start during which the data cleaning will happen. Here, the data will be checked for errors such as incorrect data formats, empty fields, or duplicate data. Moreover, in this step, the data can be structured or sorted, or data sets can be combined to make it easier to start the data analysis. This step is called data wrangling. Filters can also be applied to the data to select a subset of the data you are interested in for your analysis.

Thereafter the actual data analysis can begin, which often starts with data exploration. In this step visualizations or statistical methods are used to discover insights. During the analysis, data mining can also be done to discover and extract patterns by using machine learning, statistics, and database systems9.

Lastly, the data visualization phase can start in which insights will be turned into visualizations to help teams in their decision-making and taking action. 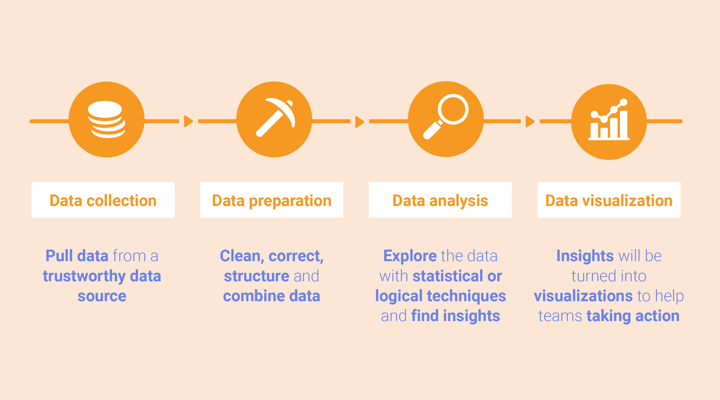 2Standard Deviation vs. Variance: What's the Difference? by Investopedia.

3Mean Median Mode: What They Are, How to Find Them by Statistics How To.

6How, When, and Why Should You Normalize / Standardize / Rescale Your Data? by Towards AI.

7  Statistical Significance: What It Is, How It Works, With Examples by Investopedia.

8R vs. R-Squared: What’s the Difference? by Statology. 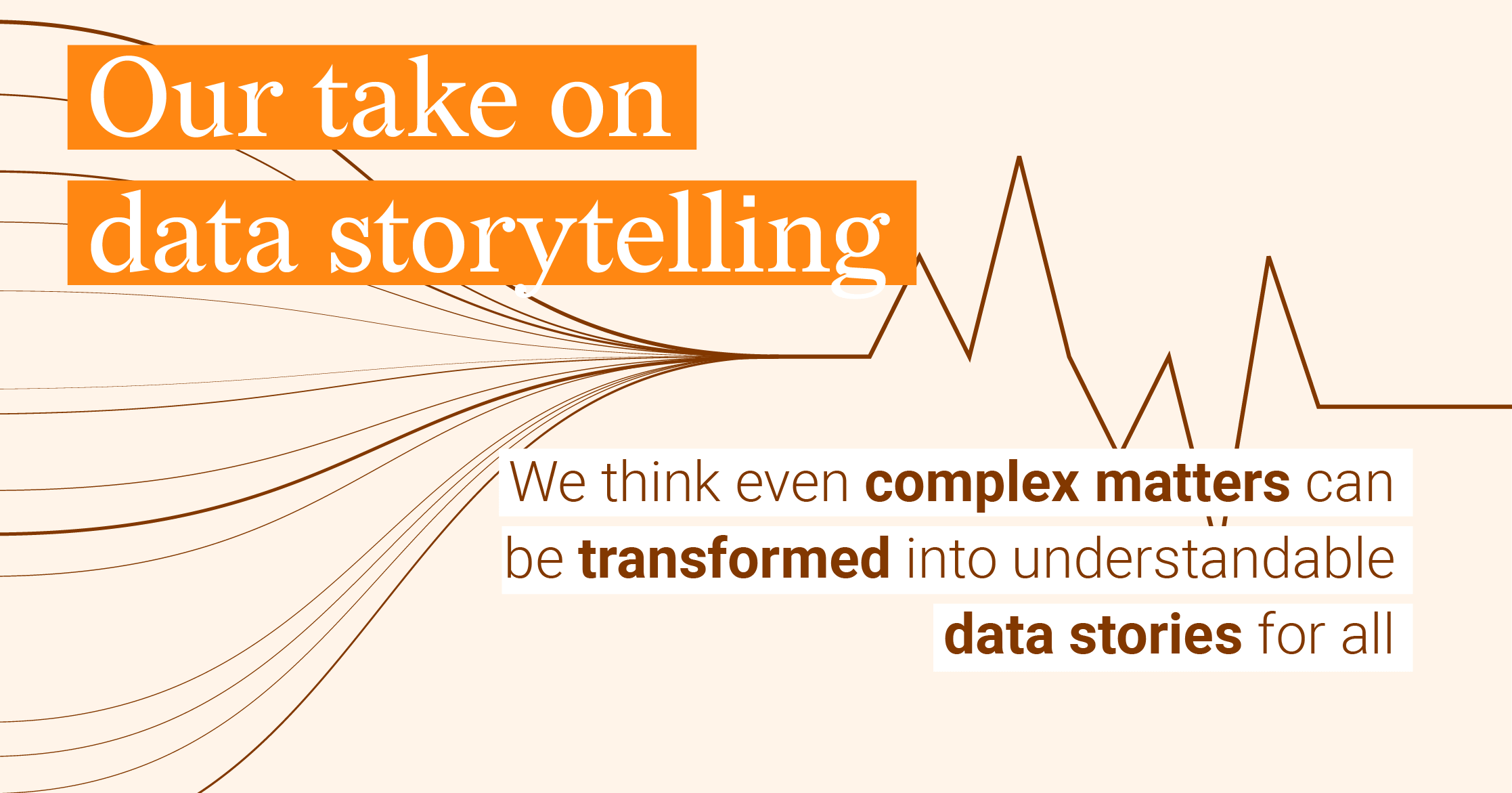 Our take on data storytelling

Increasingly organizations are turning to their data to measure, track, report, and ultimately... 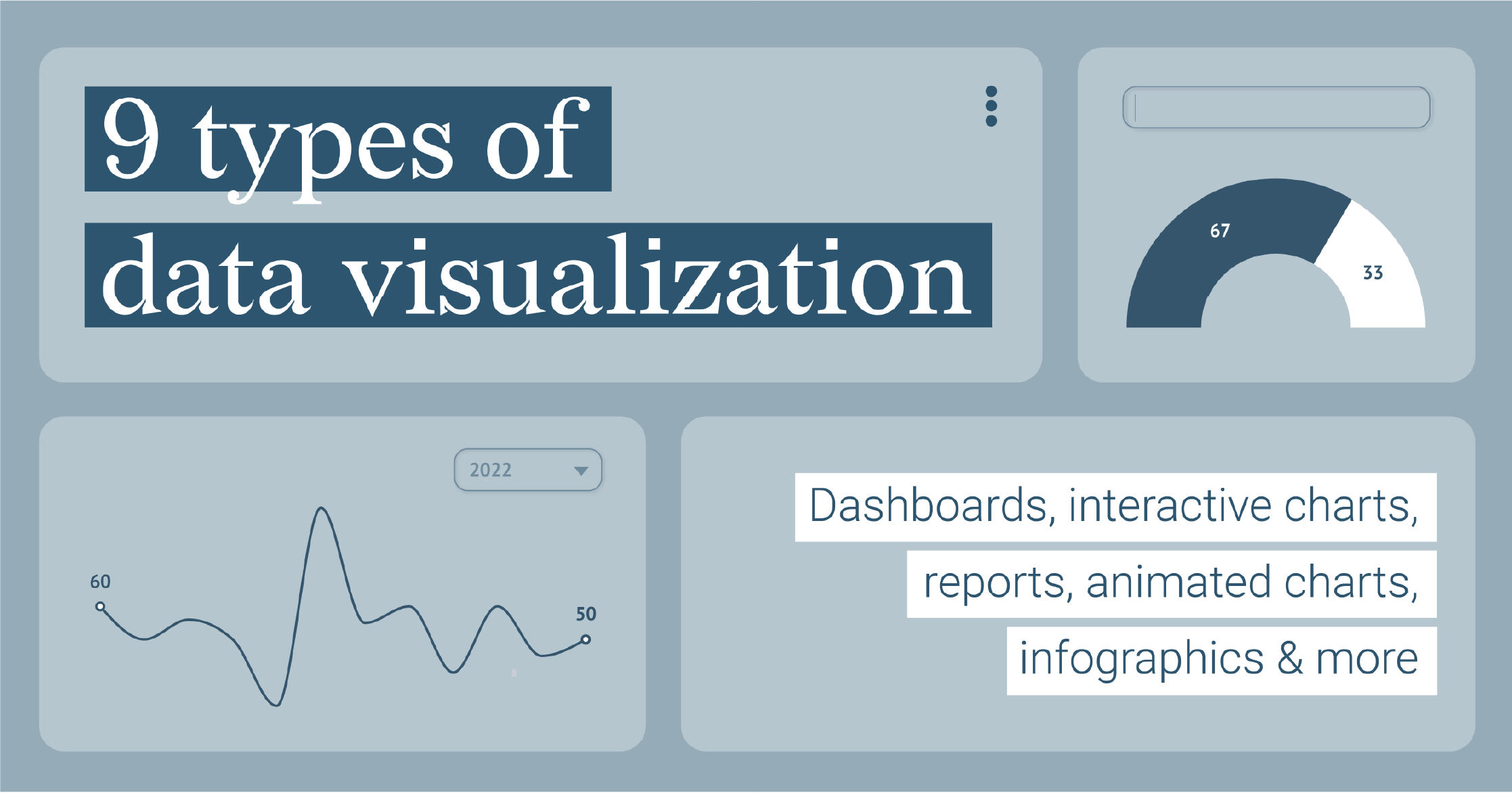 When somebody asks me about my profession and I tell them that I’m a data visualization designer,...